Ethan Banks recently wrote a nice blog post detailing the benefits and drawbacks of traditional routing protocols and comparing them with their SD-WAN counterparts.

While I agree with everything he wrote, the comparison between the two isn’t exactly fair – it’s a bit like trying to cut the cheese with a chainsaw and complaining about the resulting waste.

The traditional routing protocols were designed to solve endpoint reachability problem in a hop-by-hop destination-only forwarding environment of unknown topology.

The problem space was limited to destination-only forwarding for a good reason: that’s the only forwarding mechanism that scales (assuming decent multi-level summarization).

A typical routing protocol has to solve these challenges:

Finally, all routing protocols assume shared fate between routing protocol updates and the forwarding path. The moment this assumption is broken, we might experience interesting challenges (just ask anyone who had to configure OSPF on partially-meshed Frame Relay in the CCIE lab without using P2MP interfaces).

The situation is particularly bad in IXP environments using BGP route servers, and while people keep proposing solutions to that problem, none of them is anywhere close to perfect.

Using traditional routing protocols in such an environment is overkill; the only routing protocol that is simple enough for the task at hand is IBGP (and there is at least one SD-WAN vendor that uses BGP behind the scenes). Yes, you could also use RIPv2, but let’s not go there.

After the SD-WAN controller collects reachability information and distributes it to SD-WAN nodes, each SD-WAN node knows:

Does that look like an ECMP routing/forwarding table? Sure it does ;) Also note that it doesn’t matter whether you implement your SD-WAN (or hybrid WAN) network with secret sauce made by a startup or multiple DMVPN tunnels, the results are the same. 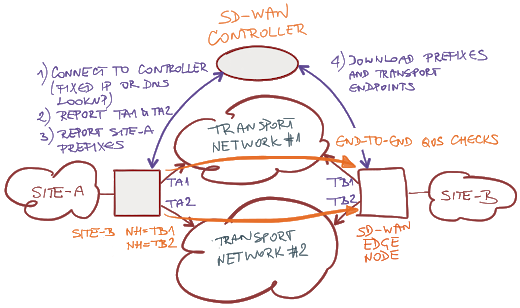 The true difference between SD-WAN solutions and traditional forwarding implementations lies in the algorithm used to distribute packets across alternate paths. Most networking devices use some variant of (un)equal cost multipathing, whereas SD-WAN devices typically:

Please note that you could have done that with multi-topology routing or DiffServ-aware MPLS-TE for years.

However, these operations have nothing to do with routing protocols – they are (like Cisco’s OER or PfR) local decisions made on the device based on current characteristics of transport paths.

In short, don’t blame the routing protocols if you don’t want to configure PfR/OER or if you think they suck.

Could We Do This With Routing Protocols?

We could, but that doesn’t mean we should. There have been numerous attempts to include QoS-awareness in traditional routing protocols, from load parameter in IGRP to QoS-based metrics in OSPF, and Cisco’s Multi-Topology Routing.

While I’ve seen some service providers using QoS-based MPLS TE (DiffServ-Aware TE), I haven’t seen anyone using QoS-based routing protocols (if you have, please write a comment). Either the implementations really suck, or there’s something fundamentally wrong with the whole picture… and I suspect it’s the latter.

You see, shifting traffic across alternate paths works very well in SD-WAN world, because the amount of shifted traffic represents a minuscule part of the overall traffic in the ISP network, whereas shifting traffic based on routing protocol decisions results in significant traffic shifts, which can result in interesting feedback loops in oscillations.

For more details, listen to the Episode 34 of Software Gone Wild in which we discussed network monitoring in the SDN era.

Interested in a technical overview of various SDN solutions? Check out the SDN Use Cases webinar (coming in autumn 2015).