During one of the ExpertExpress engagements I helped a company implement the BGP Everywhere concept, significantly simplifying their routing by replacing unstable route redistribution between BGP and IGP with a single BGP domain running across MPLS/VPN and DMVPN networks.

They had a pretty simple core site network, so we decided to establish an IBGP session between DMVPH hub router and MPLS/VPN CE router (managed by the SP).

Unfortunately, things are never as easy as they seem during the initial discussion – inevitably a few skeletons everyone forgot about fall out of a dusty closet. In this case, it was a VPN concentrator connecting remote users to the core network.

In the past, the customer used static routes on MPLS/VPN CE router and DMVPN hub router to reach the prefixes behind the VPN concentrator. As they have a single VPN concentrator, static routes proved to be sufficient… but the customer had to open a ticket with the ISP (and wait a few days for a maintenance window) every time they wanted to change the static routes on the provider-controller CE router.

With the IBGP session between DMVPN hub router and MPLS/VPN CE router, the customer started wondering: “Would it be possible to originate the prefixes reachable through the VPN concentrator on the DMVPN hub router?”

After warning them that their idea creates a single point of failure (which they accepted, looks like there’s nothing mission-critical behind the VPN box), we started discussing the technical details, in particular what the BGP next hop of the route originating from the DMVPN hub router would be and how the traffic would flow.

A slight digression into layer-3 world

If the customer had a layer-3 core network, there would be no discussion. The layer-3 switch (replacing the layer-2 network drawn as an Ethernet segment in my pictures) would advertise the prefixes behind the VPN concentrator and we could easily set the BGP next hop to the IP address of the layer-3 switch with neighbor next-hop-self command. Alas, we were facing a slightly more interesting challenge. The question we had to answer before deploying the proposed solution was “What would the BGP next hop of a static route redistributed into BGP be?” 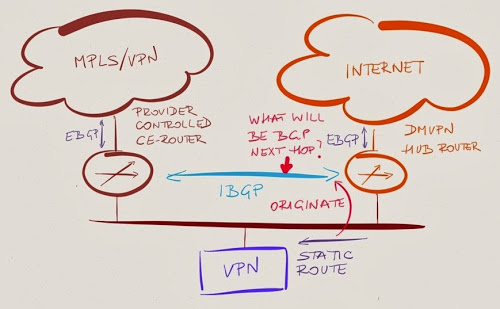 CML to the rescue

Having access to cloud-based beta version of Cisco Modeling Lab turned out to be one of the best things I got from a vendor in the last few months. Even though I was presenting at a conference in Germany, I managed to create a simple lab during one of the breaks and verify my understand of how BGP route origination works (on second thought, it might have been faster to search my blog):

I was using this configuration on DMVPN hub router to generate the desired BGP route:

BGP next hop is not modified on IBGP sessions; the managed CE router thus receives the correct value for the BGP next hop:

Unfortunately, the reality quickly diverged from the optimistic theoretical results – the BGP next hop on the MPLS/VPN CE router pointed to the DMVPN hub router.

A few minutes of troubleshooting identified the culprit: neighbor next-hop-self that we had to configure on the IBGP session between DMVPN hub router and MPLS/VPN CE router to circumvent lack of IGP between the two BGP routers (IBGP is supposed to be run in combination with an IGP that resolves BGP next hops).

We could have solved the problem with a route-map that would set BGP next hop for non-local routes and keep it unchanged for locally originated routes, but decided that the extra complexity simply isn’t worth it (sometimes you have to know when to give up).

We could probably solve it with one or two ExpertExpress sessions, or maybe I already described it in one of the case studies.