Two years ago I wrote the another Fermatish post: I described how NHRP behavior changed in DMVPN networks using NAT and claimed that it might be a huge problem, without ever explaining what the problem is.

Fabrice quickly identified the problem, but it seems the description was not explicit enough as I’m still getting queries about that post ... so here’s a step-by-step description of what’s going on.

A single DMVPN network has two hubs and two spokes. Spokes are behind NAT boxes (e.g. cable/DSL modems) that prevent IPsec session between the spokes to be established. 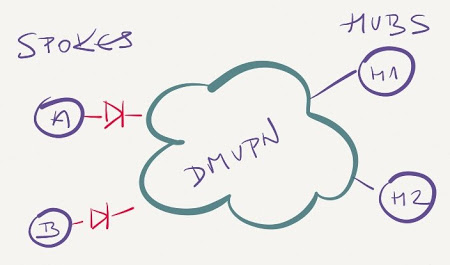 When Spoke-A tries to establish communication with Spoke-B, the following events take place:

And now for the gotcha: Spoke A continues sending traffic toward H1 until the fake NHRP entry expires, regardless of whether H1 fails in the meantime or not. Only after the fake NHRP entry expires will Spoke A send another NHRP request to the hub router(s) alive at that time (H2). End result: traffic between Spoke A and Spoke B will be interrupted for up to three minutes even though you have redundant hubs in the DMVPN network.