I don’t know whether they still teach OSI model in baseline networking courses (they should), but if you’re lucky enough to have heard about it, this is probably the picture you’ve seen:

Layer-1 (physical layer) is easy to explain: it defines the connectors, voltages and encoding scheme needed to pass a bunch of zeroes and ones between adjacent devices.

Networking devices working at layer-1 convert zeroes and ones between different voltages or transmission media. A few examples: modems (the traditional ones, not the thing that connects your WiFi to cable network, that one is at least a bridge if not a router), media converters (fiber-to-copper converters are still reasonably popular), hubs (you have to be pretty old to have real-life experience with them) and Media Access Units (Token Ring anyone?).

Layer-2 is where things get complex. It was initially defined as the layer that allows adjacent network devices to exchange frames. Every layer-2 technology has to define at least these components:

Have you noticed that I haven’t mentioned layer-2 addresses (known as MAC addresses in Ethernet)? There’s a simple reason for that: sometimes you don’t need them. You only need layer-2 addresses when you have more than two devices attached to the same physical network, like we used to have in the old cable-based Ethernet networks: 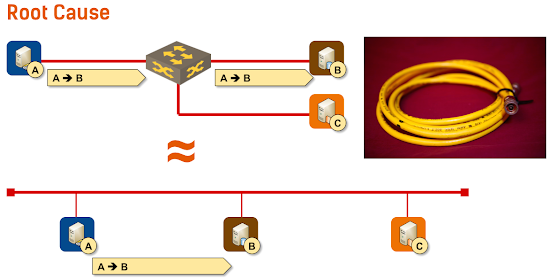 Use of point-to-point links is the primary reason for lack of layer-2 addresses in Fibre Channel networks (regardless of the violent disagreement I get every time I mention this).

The first time you truly need unique addresses is layer-3, which should provide end-to-end packet delivery across the network.

Why do we have MAC addresses in Ethernet frames? Because the original Ethernet used a coax cable with numerous devices attached to the same physical medium.

Why do we still use MAC addresses in Ethernet frames? Because IEEE always wanted to keep everything backward compatible with the original Ethernet. 100 Mbps Ethernet still supported hubs (think of them as cable extenders), and 10GE is the first Ethernet technology that doesn’t have half-duplex support.

Why are we still using layer-2? Because every vendor (apart from Amazon and initial heroic attempts by Hyper-V Network Virtualization team) thinks they need to support really bad practices that originated from the thick yellow coax cable environment, like protocols without layer-3 (and thus no usable end-to-end addresses) or solutions that misuse the properties of shared medium in ways nobody ever envisioned.

Finally, why is everyone using frame format from 40 year old technology? Because nobody wants to change the device drivers in every host deployed in a data center (or in the global Internet).