You can use a VMware NSX Edge Services Router (ESR) to connect multiple VXLAN-backed layer-2 segments within an application stack. You would configure the services router through NSX Manager (improved vShield Manager), and you’d get a VM connected to multiple VXLAN-based port groups (and probably one or more VLAN-based port groups) behind the scenes. 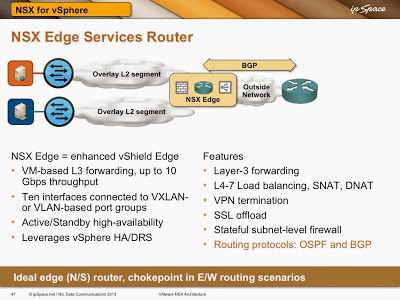 NSX Edge Services Router is the ideal solution when you need network services (firewalls, load balancers …) between the client and the server. It’s more than good enough for smaller deployments or when the majority of the traffic leaves the overlay virtual networking world (you can push up to 10 Gbps of traffic through it) … but don’t use it in high-volume environments with large amount of inter-subnet east-west traffic.

In those environments you might collapse multiple subnets into a single layer-2 segment (assuming your security engineers approve the change in security paradigm introduced with VM NIC firewalls) or use distributed routing functionality of VMware NSX. More about the latter in a follow-up blog post.