The Optimal L3 Forwarding with VARP/VRRP post generated numerous comments, ranging from technical questions about VARP (more about that in a few days) to remarks along the lines of “you can do that with X” or “vendor Y supports Z, which does the same thing.” It seems I’ve opened yet another can of worms, let’s try to tame and sort them.

First-hop redundancy protocols (FHRP) solve a simple problem: IPv4 has no standard host-to-router protocol. Hosts are usually configured with a static address of the first-hop router, forcing the routers to share an IP address (sometimes called Virtual Router IP Address) in redundant environments. In most cases the routers also share the MAC address of the shared first-hop router IP address to work around broken or misconfigured secured IP stacks that ignore gratuitous ARPs sent after the ownership of the shared IP address changes.

I’ll use the term FHRP throughout this document to indicate a range of protocols, including HSRP, GLBP, VRRP v2 and v3.

Typical FHRP use case is a large layer-2 domain connecting numerous end hosts to more than one router. The routers are (relatively) close together, and there’s some indeterminate layer-2 infrastructure (anything from a thick coax cable to large TRILL or SPB fabric) between the end hosts and the routers. 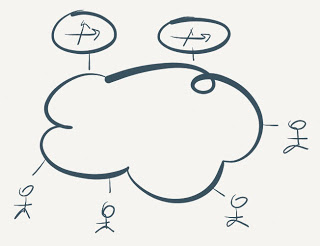 The first-hop routers cannot rely on any particular forwarding behavior of the underlying layer-2 infrastructure; each router must have its own set of MAC addresses that have to be active – traffic must be sourced from those MAC addresses lest the layer-2 switches start flooding the unicast traffic sent to one of the router’s MAC address. 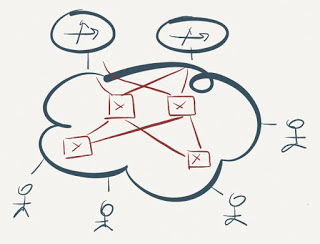 The primary goal of optimal layer-3 forwarding in a data center environment is to minimize the leaf-to-spine traffic in environments where the amount of east-west (server-to-server) traffic significantly exceeds the amount of north-south (server-to-client) traffic. The only way to reach this goal is to introduce layer-3 forwarding functionality into hypervisors or (failing that) the top-of-rack (ToR) switches. 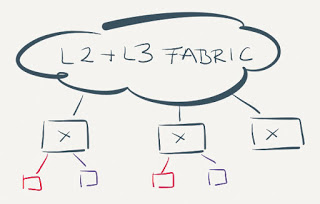 While we'll definitely see AWS-style layer-3 forwarding in hypervisors, we're not there yet. The only shipping products supporting it in May 2013 are Hyper-V Network Virtualization (which requires NVGRE encapsulation), NEC's ProgrammableFlow virtual switch for Hyper-V, and Midokura's Midonet.

The ability to migrate a running VM between physical hosts (and ToR switches) introduces additional requirements: all ToR switches have to share the same MAC address; nobody likes to see the traffic trombones that result from a VM being pinned to a MAC address of a remote ToR switch.

As always the networking industry tried to “solve” the problem by introducing all sorts of hacks inspired ideas, some of them more useless than the others. The most common ones (described in this blog post) are:

More creative solutions are described in other blog posts:

No FHRP with Borg architecture

Juniper’s Virtual Chassis looks exactly the same as Cisco’s VSS or HP’s IRF from the outside, but uses a slightly different implementation mechanism: somewhat independent control planes coordinated through a shared management plane.

Before someone persuades you to solve optimal L3 forwarding problem with a virtual stack of ToR switches spread all over your data center (and I've seen consultants peddling this "design" to unsuspecting customers), consider how the traffic will flow. 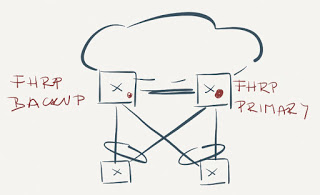 This solution is almost a no-brainer, although the implementation details must be pretty complex, otherwise it’s hard to understand why it took some vendors years to implement it. Here’s how it works:

As always, the devil is in the details: L3 switches might send the routed traffic from their hardware MAC address (not FHRP MAC address), thoroughly confusing devices with broken TCP stacks that prefer to glean incoming packets instead of using standard mechanisms like ARP.

Active/active FHRP behavior is nice-to-have if you’re satisfied with L3 forwarding on core switches. Just remember that all inter-subnet east-west traffic traverses the core even when the two VMs sit in the same hypervisor host. 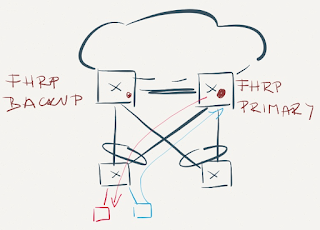 While the trick might work well in original FHRP use cases (with large L2 domain between the hosts and the bank of routers), it’s totally useless in data center environments requiring L3 forwarding at the ToR switches: 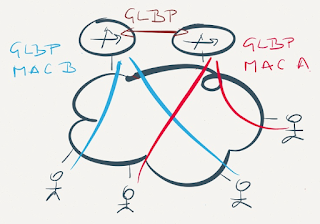 Multi-FHRP hack, where each router belongs to multiple FHRP groups on each interface and end-hosts use different first-hop gateways, is almost identical (but harder to manage) than GLBP hack 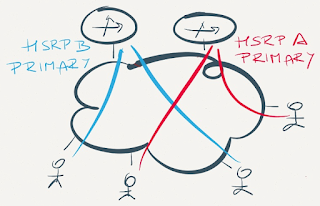