Whenever software switching nerds get together and start discussing the challenges of high-speed x86-based switching, someone inevitably mentions PF_RING, an open-source library that gives you blazingly fast packet processing performance on a Linux server.

I started recording a podcast with Luca Deri, the author of PF_RING, but we diverted into discussing ntopng, Luca’s network monitoring software. We quickly fixed that and recorded another podcast – this time, it’s all about PF_RING, and we discussed these topics:

25 years ago when I started my networking career, mainframes were all the rage, and we were doing some crazy stuff with small distributed systems that quickly adapted to topology changes, and survived link, port, and node failures. We called them routers.

Yes, we were crazy and weird, but our stuff worked. We won and we built the Internet, proving that we can build networks bigger than any mainframe-based solution could ever hope to be.

One of my readers was reading the Preparing an IPv6 Addressing Plan document on RIPE web site, and found that the document proposes two approaches to IPv6 addressing: encode location in high-order bits and subnet type in low-order bits (the traditional approach) or encode subnet type in high-order bits and location in low-order bits (totally counter intuitive to most networking engineers). His obvious question was: “Is anyone using type-first addressing in production network?”

A long long time ago Colin Dixon wrote the following tweet in response to my Controller Cluster Is a Single Failure Domain blog post:

He’s obviously right, but I wasn’t talking about interconnected domains, but failure domains (yeah, I know, you could argue they are the same, but do read on).

Whenever I’m running an SDDC workshop or doing on-site SDN/SDDC-related consulting, the question of hardware gateways between overlay virtual networks and physical world inevitably pops up.

My usual answer: You have to understand (A) what type of gateway you need, (B) what performance you need and (C) what form factor will give you that performance. For more details, watch the Hardware Gateways video from Scaling Overlay Virtual Networks webinar

You might remember my blog post claiming we had a system with SDN-like properties more than 20 years ago.

It turns out SDN is older than that – Rob Faulds found an old ComputerWorld ad from 1989 promoting AT&T SDN service, and it seems SDN was in operation as early as 1985. 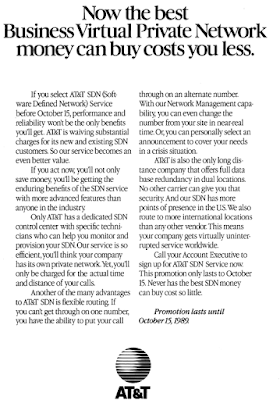 DNS is a crucial component in modern scale-out application architectures, so when Alex Vayl and Kris Beevers from NSONE contacted me just as I was starting to work on my Active-Active Data Centers presentation, I was more than interested to hear what their solution can do.

The result: Episode 29 of Software Gone Wild in which we discussed a number of topics including:

Here’s a short question I got from one of my readers:

I am a CCIE in SP/DC & working as Technical Architect in US. I follow your website but I don’t know where to start for SDN/Virtualization/Openstack…

I guess he’s not alone, so here’s a long list of resources I put together in the last 5+ years.

Before I get started: you’ll find links to most of these resources on ipSpace.net SDN Resources page.

What is best practice to get a copy of the VM image from DC1 to DC2 for DR when you have subrate (155 Mbps in my case) Metro Ethernet services between DC1 and DC2?

The slow link between the data centers effectively rules out any ideas of live VM migration; to figure out what you should be doing, you have to focus on business needs.

The video of my Troopers 15 IPv6 Microsegmentation presentation has been published on YouTube. As with the Automating Network Security video, it’s hard to read the slides; you might want to look at the slide deck on my public content web site.

I was listening to one of the HP SDN Packet Pushers podcasts in which Greg made an interesting comment along the lines of “people say that OpenFlow doesn’t scale, but what HP does with its IMC is it verifies the amount of TCAM in the switches, checks whether it can install new flows, and throws an alert if it runs out of TCAM.”

Iwan Rahabok sent me a link to a nice vRealize setup he put together to measure maximum utilization across all uplinks of a VMware host. Pretty handy when the virtualization people start deploying servers with two 10GE uplinks with all sorts of traffic haphazardly assigned to one or both of them.

Oh, if the previous paragraph sounds like Latin, and you should know a bit about vSphere/ESXi, take a hefty dose of my vSphere 6 webinar ;)

PF_RING is a great open-source project that enables extremely fast packet processing on x86 servers, so I was more than delighted when Paolo Lucente of the pmacct fame introduced me to Luca Deri, the author of PF_RING.

When we started chatting, we couldn’t resist mentioning ntopng, another open-source project Luca is working on.

My “What Is Layer-2 and Why Do You Need It?” blog post generated numerous replies, including this one:

Pretend you are a device receiving a stream of bits. After you receive some inter-frame spacing bits, whatever comes next is the 2nd layer; whether that is Ethernet, native IP, CLNS/CLNP, whatever.

Not exactly. IP (or CLNS or CLNP) is always a layer-3 protocol regardless of where in the frame it happens to be, and some layer-2 protocols have no header (apart from inter-frame spacing and start-of-frame indicator).

The VMware Networking Deep Dive webinar was getting pretty old and outdated, but I always managed to get an excuse to postpone its refresh – first it was lack of new features in vSphere releases, then bad timing (doesn’t make sense to do a refresh in June with new release coming out in August), then lack of documentation (vSphere 6 was announced in August 2014; the documentation appeared in March 2015).

Network Computing recently published my “Yes, NFV Is Important For The Enterprise” article. Short summary: NFV is (like BGP and MPLS) yet another technology that is considered applicable only to service provider networks but makes great sense in some enterprise contexts.

I’ll talk about enterprise aspects of NFV at Interop Las Vegas, and describe some NFV technical details and typical use cases in an upcoming webinar.

add comment
An interesting message appeared on v6ops mailing list a few days ago: the first interconnect between independent IPv6 implementations was established 20 years ago. No wonder some youngsters who don't know any better treat this venerable protocol like a modem and ignore it in favor of IPv4 ;)
see 1 comments

I was talking and writing about IPv6 myths for years, but like any good myth they tend to be pretty robust. Unfortunately, as I explained in the IPv6 Myths and Reality part of IPv6 High Availability Strategies webinar, the reality seems pretty bleak: all we got are longer addresses, half-baked protocols, unsolved challenges, and heaps of confusion.

A few months ago Gigamon did the right thing: they figured out that their true value lies not in the hardware boxes, but in the software running on them, and decided to start offering their GigaVUE-OS on whitebox switches.

So far, Arista is the only other networking vendor that figured out it doesn't make sense to resist the tide - Arista EOS is now available on Open Compute Networking whitebox switches.

Update 2015-04-02: If you followed the links in this blog post, you probably figured out that it’s an April Fools’ one. However, that’s not the end of the story…