Summary for differently attentive: A hub router failure in multi-hub DMVPN networks can cause spoke-to-spoke traffic disruptions that last up to three minutes.

Almost every DMVPN design I’ve seen has multiple hubs for redundancy purposes. I’ve always preached the “one hub per DMVPN tunnel” mantra (see the diagram below) to those who were willing to listen citing “NHRP issues after hub failure” as one of the main reasons you should not have two or more hubs per DMVPN tunnel. 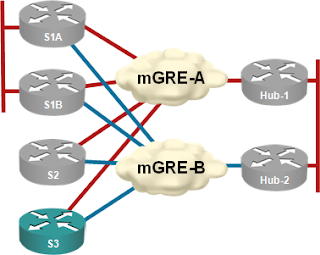 The one-hub-per-tunnel rule works well in small and medium-sized DMVPN deployments, but you can’t use it in large-scale (Phase 3) deployments with hierarchical hub structure as NHRP shortcuts between subnets never got properly implemented in the DMVPN code. In these cases, you’re forced to have multiple hubs in the same DMVPN subnet. 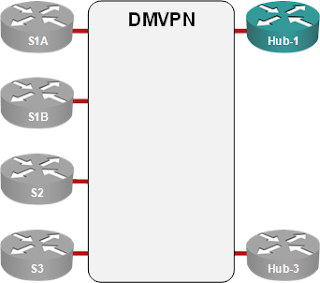 While developing the material for the DMVPN New Features webinar, I tested the convergence of both designs and found out significant differences in a hub failure scenario (convergence after a spoke failure depends purely on the routing protocol settings).

Why does it matter?

A hub router has three important roles in a Phase 2/3 DMVPN network:

A hub failure can thus directly impact spoke-to-spoke connectivity in those DMVPN networks where spokes can’t establish direct IPsec sessions (due to NAT or other limitations).

When you lose a hub router in one-hub-per-tunnel DMVPN design, NHRP registrations on the tunnel fail completely and the routing across the affected tunnel stops after the spoke routers figure out their routing protocol neighbor is gone.

If you combine 10 second NHRP timers with interface state tracking (configured with if-state nhrp), the spokes stop using the failed tunnel in less than 20 seconds.

IOS releases prior to NAT enhancements. The spokes detect hub router failure through NHRP registration timeouts (see above). Spoke-to-spoke traffic flows through the hub only if the NRHP entry for the other spoke is incomplete or otherwise faulty (for example, IPsec session is not operational, resulting in no socket state) and is not tied to any individual hub. As soon as the spoke detects the failure of its currently selected hub router, it switches to another hub router, resulting in short disruption of inter-spoke traffic.

IOS releases after NAT enhancements (12.4T and 15.x). Spoke routers create fake NHRP entries for other spokes using the hub’s router NBMA address. The fake entry disappears as soon as the spoke router receives a NHRP reply from the other spoke, but could stay in the NHRP cache indefinitely if the spoke-to-spoke IPsec session cannot be established.

These entries are tied to specific NBMA address (of the selected hub router), not to the hub router and do not disappear when the spoke router discovers hub router failure (via NHRP registration failure). To make matters worse, the fake entries use a 3-minute expiration timer that cannot be adjusted with any publicly available DMVPN configuration command that I could find. A hub router failure can thus disrupt the spoke-to-spoke traffic for up to three minutes (until the fake NHRP entry expires).

To learn more about DMVPN design and deployment issues watch the recording of my DMVPN: From Basics to Scalable Networks webinar and register for the DMVPN New Features webinar. You can get access to both webinars as part of the yearly subscription package.

You should also consider our professional services team if you need expert help in DMVPN network design or deployment.