I encountered an ancient problem during one of my ExpertExpress engagements:

Challenge: what’s the simplest possible configuration to get it done? 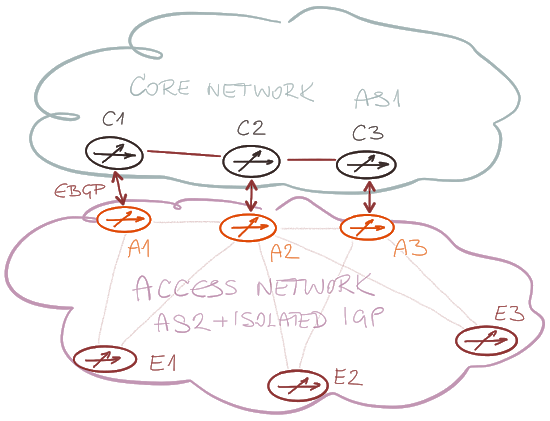 As we have parallel EBGP sessions between the autonomous systems, MED is the best tool for the job (assuming the core network doesn’t use local preference), but how do you set MED on the access network routers?

In a simple IP network, you could redistribute access network IGP prefixes into BGP on the routers connecting access AS to core AS (A1…A3). IGP cost would be automatically copied into MED. Mission accomplished.

Unfortunately, this customer uses L3VPN, and the user prefixes are advertised into BGP as VPNv4 prefixes on the PE routers (E1 … E3 in our diagram). Setting MED at that point makes no sense.

What we need is a way of indicating the cost of transit from A1…A3 to E1…E3 with the MED attribute set on A1…A3. Ideally, we’d have a mechanism to copy IGP cost toward the BGP next hop into MED attribute, only I haven’t found one in Cisco IOS (that the customer is using). If I missed something, please write a comment.

Alternatively, one could tag routes originated on E1…E3 with BGP communities and use route maps on A1…A3 to set MED values based on those communities, but that seems clunky.

Anything else I’ve missed apart from using a single IGP and next-hop-unchanged which is a nonstarter? Feedback highly appreciated!