Packet forwarding behavior of VMware NSX and Hyper-V Network Virtualization is well documented; no such documentation exists for Amazon VPC. However, even though Amazon uses a proprietary solution (heavily modified Xen hypervisor with homemade virtual switch), it’s pretty easy to figure out the basics from the observed network behavior and extensive user documentation.

Chiradeep Vittal ran a number of tests between virtual machines in an Amazon VPC network and shared the results in a blog post and extensive comments on one of my posts. Here’s a short summary:

Seems like a run-of-the-mill virtual networking implementation, but wait – that’s not all. The beauty of Amazon VPC forwarding model is the multi-VRF approach: you can create multiple routing tables in your VPC and assign one of them to each subnet. 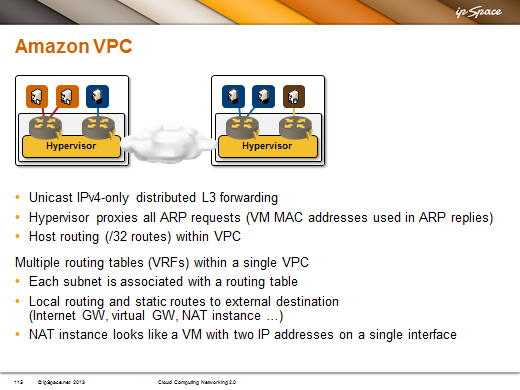 You could, for example, use the default route toward the Internet for web server subnet, default route toward your data center for database server subnet, and no default routing (local connectivity only) for your application server subnet. Pretty cool stuff if you’re an MPLS/VPN geek used to schizophrenic routing tables, and quite a tough nut to crack for people who want to migrate their existing layer-2 networks into the cloud. Massimo Re Ferre made a perfect summary: everyone else is virtualizing the network, Amazon VPC is abstracting it.