Initial release of Hyper-V Network Virtualization (HNV) was an add-on to the Hyper-V Extensible Switch, resulting in an interesting mixture of bridging and routing. In Windows Server 2012 R2 the two components became tightly integrated, resulting in a pure layer-3 solution. 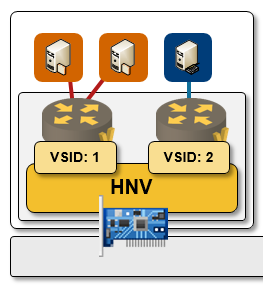 Hyper-V Network Virtualization module is an ARP proxy: it replies to all broadcast ARP requests and multicast ND request assuming it has the NetVirtualizationLookupRecord for the destination IP address.

Hyper-V Network Virtualization module intercepts all packets received by the Hyper-V extensible switch and drops all non-IP/ARP packets. ARP/ND packets are intercepted (see above), and the forwarding of IP datagrams relies solely on the destination IP address:

Extra lookup steps within the transport network are performed for non-local destinations:

HNV has full support and feature parity for IPv4 and IPv6. Whenever this blog post mentions IP, the behavior described applies equally well to IPv4 and IPv6.