Almost a year ago rumors started circulating about a Deutsche Telekom pilot network utilizing some crazy new optic technology. In spring I’ve heard about them using NFV and Tail-f NCS for service provisioning … but it took a few more months till we got the first glimpses into their architecture.

Deutsche Telekom realized (early enough) that they would start making losses on every single service they offer unless they drastically reduced their costs and simplified service provisioning.

We’ve heard similar arguments numerous times during the last few years (industry press was full of them at the ONF launch), but Deutsche Telekom decided to go down a totally different route. Instead of invoking the ghosts of virgin unicorns and sprinkling pixie dust on white-label boxes they decided to go back to the basics and design the next-generation network from scratch, simplifying every single component.

Horseshoes instead of rings 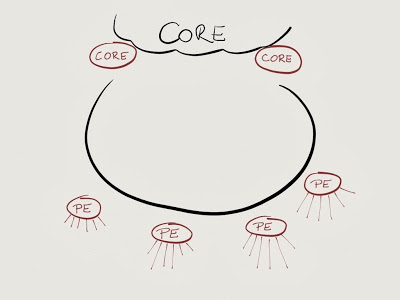 Everyone is using complex (and expensive) optical transport gear on long-distance fibers. Deutsche Telekom uses passive add-drop multiplexers and WDM router interfaces (this is the only bleeding-edge part of their solution: they use coherent 100GE optics on router interfaces).

The router interfaces generate signals with the right color to match the ADM to which they are connected. Core routers have numerous interfaces connected to the same ADM (horseshoe headend), PE routers have four 100GE upstream interfaces, each one emitting a different lambda. 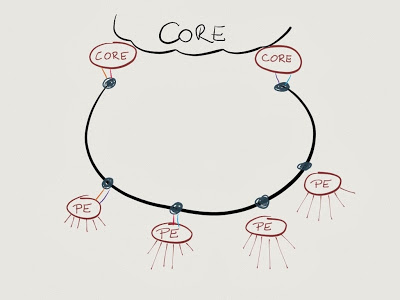 You could further minimize the equipment by generating multi-lambda signal in router linecards, but such a beast has yet to be built with 100GE coherent optics.

The logical topology of the optical network is exceedingly simple. Every PE router has two 100GE lambdas going to each core router, as shown on the next diagram (I drew only one lambda to keep the diagram clean), and they don’t use LAG/LACP (or anything similar) to bond the lambdas, but rely instead on IGP and ECMP. 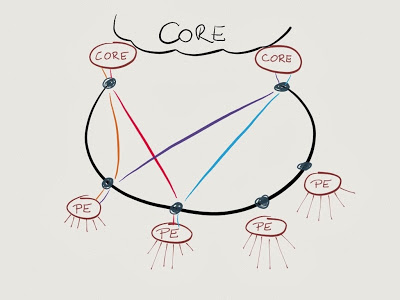 Deutsche Telekom presentations are not very explicit when it comes to the core network (upstream of core routers). If I understood correctly, they have a full mesh between the core routers, but it doesn’t matter that much. Their primary customer base (at least in the Croatian pilot) are residential customers that communicate with servers outside of DT network, and DT tries to keep traffic away from the core by establishing extensive peering relationships between external content providers and as many core routers as possible.

Having a simple logical topology greatly simplifies the routing. They use a single simple IGP instance with no MPLS whatsoever.

Customer VPNs are implemented with IP encapsulation (L2TPv3 or equivalent), they wouldn’t gain anything by deploying MPLS TE in their topology, and they decided to forgo MPLS fast reroute.

IGP-based LFA would be a good enough fast reroute mechanism in their topology, but (as far as I understood) they decided not to use it. The answer I got from Ian Farrer during his PLNOG presentation was brilliant: “I couldn’t find a single business use case that would require 50 msec failover, and we can easily get 200 msec convergence with IGP.”

The cherry on the top of the already-beautiful cake: they hate the complexities of dual stack, so the access network (horseshoes) is IPv6-only.

End result: extremely simple and reliable network. Easy to operate, easy to troubleshoot, built with traditional technologies, and using traditional equipment (they decided to use ASR 9000s for PE and core routers).