Every single network device (or a distributed system like QFabric) has to perform at least three distinct activities:

Routers are used as a typical example in every text describing the three planes of operation, so let’s stick to this time-honored tradition: 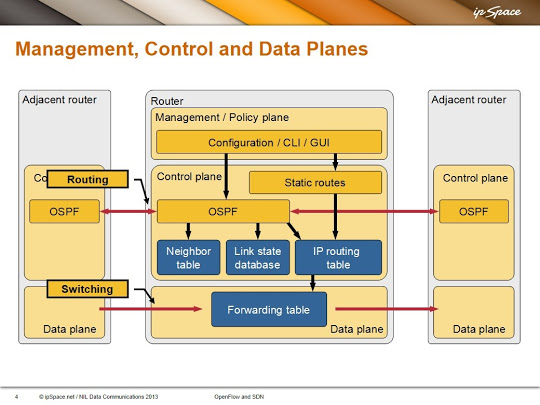 The slide is from one of my SDN/OpenFlow presentations

The management plane is pretty straightforward, so let’s focus on a few intricacies of the control and data planes.

Data plane should be focused on forwarding packets but is commonly burdened by other activities:

Data plane forwarding is hopefully performed in dedicated hardware or in high-speed code (within the interrupt handler on low-end Cisco IOS routers), while the overhead activities usually happen on the device CPU (sometimes even in userspace processes – the switch from high-speed forwarding to user-mode processing is commonly called punting).

In reactive OpenFlow architectures a punting decision sends a packet all the way to the OpenFlow controller.

Regardless of the implementation details, it’s obvious the device CPU represents a significant bottleneck (in some cases the switch to CPU-based forwarding causes several magnitudes lower performance) – the main reason one has to rate-limit ACL logging and protect the device CPU with Control Plane Protection features.