It took years before the rumored Cisco vSwitch materialized (in form of Nexus 1000v), several more years before there was the first competitor (IBM Distributed Virtual Switch), and who knows how long before the third entrant (recently announced HP vSwitch) jumps out of PowerPoint slides and whitepapers into the real world.

Compare that to the Hyper-V environment, where we have at least two virtual switches (Nexus 1000V and NEC's PF1000) mere months after Hyper-V's general availability.

The difference: Microsoft did the right thing, created an extensible vSwitch architecture and thoroughly documented all the APIs (there's enough documentation that you can go and implement your own switch extension if you're so inclined). 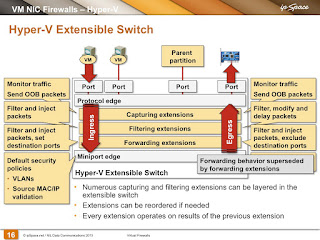 It seems Microsoft really learned the hard lessons of the circuitous history of virtual networking and it looks like they did the right thing … assuming the highly extensible mechanism they implemented doesn't bog down the switching performance. Time to do some performance tests. Any volunteers?

Interested in virtual networking? Watch these webinars (you get all of them with the yearly subscription):