I usually use the “Nicira is Skype of virtual networking” analogy when describing the differences between Nicira’s NVP and traditional VLAN-based implementations. Cade Metz liked it so much he used it in his What Is a Virtual Network? It’s Not What You Think It Is article, so I guess a blog post is long overdue.

Before going into more details, you might want to browse through my Cloud Networking Scalability presentation (or watch its recording) – the crucial slide is this one: 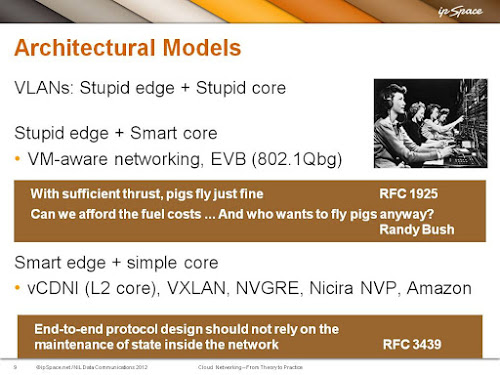 In the beginning, there was a patch cord

Typical virtualized data centers we’re seeing today are no better than manual service exchanges using cord pairs to connect the users – the hypervisor virtual switches using VLANs to create virtual networks are too simplistic to tell the network what they need, so the networking team has to provision the required VLANs manually.

Good morning, which VLAN would you like to talk with today? (source: Wikipedia)

The VM-aware networking is an interesting twist in the story – the exchange operator is listening to the user traffic and trying to figure out who they want to talk with.

Following the great example of telephone exchange vendors that heaped tons of complexity into their gear (ensuring hefty margins and pricey support contracts), the networking vendors are trying to persuade you that you should keep the edge (hypervisors) as simple as possible and let the network (= their gear) deal with the complexities of scaling VLANs and L2 switching.

Does it make sense? Let’s see – to get a somewhat scalable VLAN-based solution, you’d need at least the following components:

It might be just me, but looking at this list, RFC 1925 comes to mind (“with sufficient thrust, pigs fly just fine”).

What could be better than a flying pig? A brass flying pig!
(unfortunately, the folks @ whimsie.com no longer make them)

To understand the implications of ever-increased complexity vendors are throwing at us, go through the phenomenal presentation Randy Bush had @ NANOG26, in which he compared the complexities of voice switches with those of IP routers. The last slide of the presentation is especially relevant to the virtual networking environment:

Going back to the voice world: eventually someone figured out it’s way simpler to move the voice processing complexity to the end-devices (VoIP phones) and use a simple and cheap transport (the Internet) between them.

We can watch the same architectural shift happening in the virtual networking world: VXLAN, NVGRE and STT are solutions that move the virtual networking complexity to the hypervisor, and rely on proven, simple, cheap and reliable IP transport in the network. No wonder the networking companies like you more if you use VLAN-based L2 hypervisor switches (like the Alcatels, Lucents and Nortels of the world preferred you buy stupid phones and costly phone exchanges).

Does that mean that EVB, TRILL, and other similar technologies have no future? Absolutely not. Networking industry made tons of money deploying RSRB, DLSw and CIPs in SNA environments years after it was evident TCP/IP-based solutions (mostly based on Unix-based minicomputers) offer more flexible services for way lower price. Why should it be any different this time? We made so much money supporting this gear. Let’s try to do it again!