This is very old news to any seasoned system or network administrator dealing with VMware/vSphere: the vSwitch and vNetwork Distributed Switch (vDS) do not support Link Aggregation Control Protocol (LACP). Multiple uplinks from the same physical server cannot be bundled into a Link Aggregation Group (LAG, also known as port channel) unless you configure static port channel on the adjacent switch’s ports.

When you use the default (per-VM) load balancing mechanism offered by vSwitch, the drawbacks caused by lack of LACP support are usually negligible, so most engineers are not even aware of what’s (not) going on behind the scenes.

Let’s start with the simplest possible topology: an ESX server connected to a switch with two parallel links. Ideally, the two parallel links would be placed in a LAG, or one of them would be blocked by STP. As vSwitch supports neither LACP nor STP, both links are active and forwarding loops in the network are prevented by vSwitch’s split horizon switching. 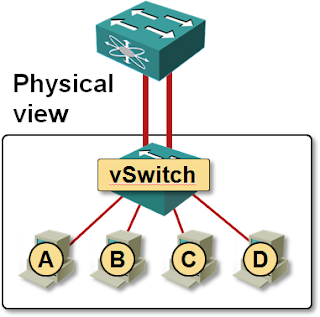 The upstream switch is not aware that the two parallel links terminate in the same physical device. It considers them connected to two separate hosts (or switches) and uses the standard source-MAC-address-based learning to figure out how to forward data to virtual machines A-D. Assuming that the VMs A and B use the first uplink and C and D use the second one, the switch builds the following view of the network in its MAC address table: 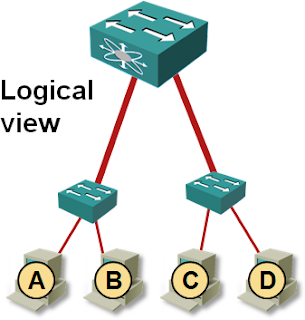 The split view of the ESX server is not a bad idea as long as the vSwitch performs per-VM load balancing – MAC address table is stable and all traffic flows are symmetrical; the only drawback is limited load balancing capability – a single VM can never use both links.

Do we really need static LAG?

The behavior of our small network becomes more erratic if we enable IP-hash-based load balancing on the vSwitch. All of a sudden the same source MAC address starts appearing on both links (the same VM can use both links for different TCP or UDP sessions) and the MAC address table on the switch becomes “somewhat” more dynamic.

Without synchronized ESX-switch configuration you can experience one of the following two symptoms:

Interaction of vSwitch with link aggregation is just one of many LAG-related topics covered in my Data Center 3.0 for Networking Engineers webinar (buy a recording or yearly subscription).