There are two reasons one would bundle parallel Ethernet links into a port channel (official term is Link Aggregation Group):

Ethan Banks wrote an excellent explanation of traditional port channel caveats (proving that 1+1 sometimes does not equal 2); things get way worse when you start using Multi-Chassis Link Aggregation due to hot potato switching (the switch tries to forward packets toward destination MAC address as soon as possible) used by all MLAG implementations I’m familiar with.

Hot potato switching is a very simple principle (try to get rid of the packet as soon as possible) best explained with a few examples. Let’s start with a very simple architecture: a router with a port channel connected to two switches and a bunch of servers with a single uplink. 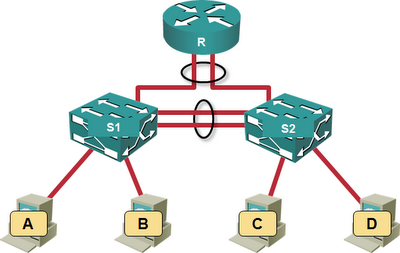 When the router needs to communicate with server A, it sends an ARP request. Let’s assume the ARP request goes over the R–S2 link and is then flooded across S2–S1 and S1–A links (as well as a few other links). At this moment all switches know where R is.

When A replies to R, the switches forward packet based on their MAC address tables. Without modifying the MAC learning process, the return packet would go from A through S1 and S2 to reach R (and all the subsequent traffic could flow over the same link) – clearly a suboptimal traffic flow that places unnecessary load on the inter-switch link.

Every decent MLAG implementation thus has to modify the MAC learning process: as soon as a new source MAC address is seen in a packet arriving through a port belonging to a port channel, the MAC reachability information is propagated to all other members of the “stack” and they use their local ports in the same port channel to forward the traffic toward the newly-discovered MAC address.

Architectures supporting more than two nodes in a MLAG group might have to run a routing protocol internally and forward the packets toward the closest port in the port channel. Juniper is (according to the presentation they gave us at Net Field Day) running IS-IS between members of their “distributed stack”. Alternative architectures that lobotomize all but one control plane are simpler: the single active control plane modifies MAC address tables in all switches.

With the modified MAC learning rules, the entry for MAC address R in S1 points to the port in the port channel toward R, not to the inter-switch link and the traffic from A to R flows over the shorter path A–S1–R. As you can see, the switches successfully got rid of the hot potato (= the packet) without warming the inter-switch link.

To make the long story short (more in a follow-up post): if servers A and B decide to send data to R concurrently, there’s no way to split that load across the links in the port channel between R and S1+S2.