As I was preparing the materials for Ansible 2.7 Update webinar sessions I wanted to dive deeper into declarative configuration modules, starting with “I wonder what’s going on behind the scenes”

No problem: configure EEM applet command logging on Cisco IOS and execute an ios_interface module (more about that in another blog post)

I hate Ansible’s “let’s develop almost-identical but differently-named modules for every platform” approach to network automation and use NAPALM wherever possible.

Starting with the ios_interface sample playbook, I changed ios_interface call into net_interface, ran the playbook on IOS and NX-OS devices, and failed miserably:

What could possibly go wrong? Here’s a slide from my Ansible for Networking Engineers webinar explaining how platform-independent modules really work: 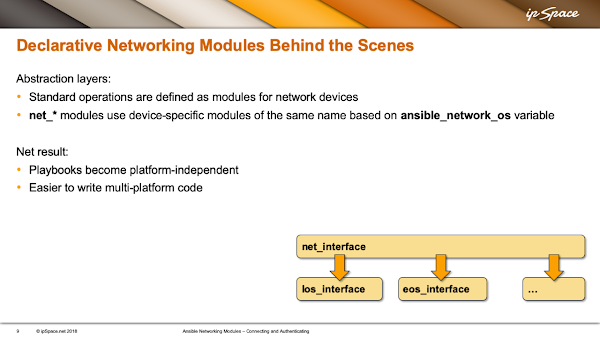 Got it? The net_interface module is just a thin layer of veneer using platform-specific something_interface modules (selected based on ansible_network_os variable) to do the real work.

Still doesn’t explain the failure, does it? Let’s check the parameters of ios_interface and nxos_interface (the modules implementing net_interface behind the scenes):

You can probably see the problem by now: there’s absolutely no way you could bring an IOS and a NX-OS interface in UP state using the same set of parameters.

Old woodworkers had a saying that might be applicable to many software projects not just Ansible: “measure twice, cut once.” In this particular case it seems we’re in the “I cut it three times and it’s still too short” territory :(