Reading academic articles about Internet-wide routing challenges you might stumble upon valley-free routing – a pretty important concept with applications in WAN and data center routing design.

If you’re interested in the academic discussions, you’ll find a pretty exhaustive list of papers on this topic in the Informative References section of RFC 7908; here’s the over-simplified version.

Imagine a typical multi-layer somewhat-hierarchical routing structure. It could be a hierarchical WAN design, data center fabric, or the global Internet (we’ll focus on the latter in this blog post). You’d expect the traffic to flow from the source leaf node up the layers until it hits a path toward the destination leaf node where it makes a turn and starts flowing down the layers until it gets to the destination leaf node. 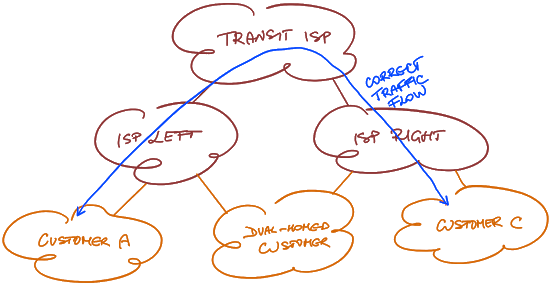 Unfortunately life isn’t always as neat and tidy. For example, a dual-homed customer could create a route leak due to incompetence or fat-finger incident and become a transit AS between ISP Left and ISP Right. Assuming our understanding of routing hierarchy is correct, the traffic from Customer-A toward Customer-B goes uphill, then dips into a valley (dual-homed customer), goes uphill again, and finally goes downhill to reach Customer-B. 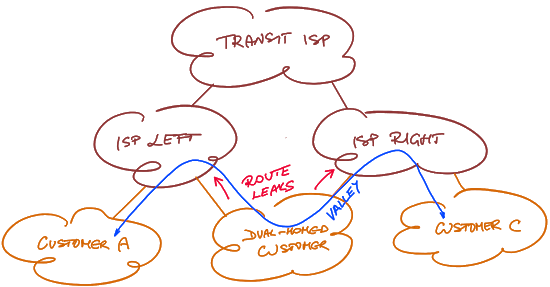 Loose definition: A routed network with no traffic flow valleys for any source-destination pair has valley-free routing. 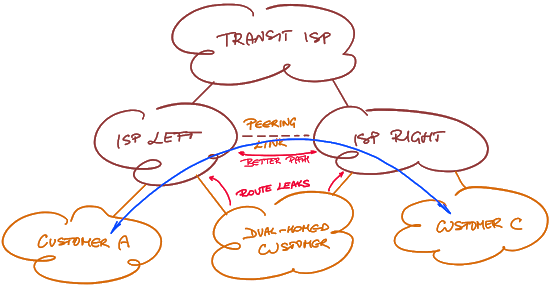 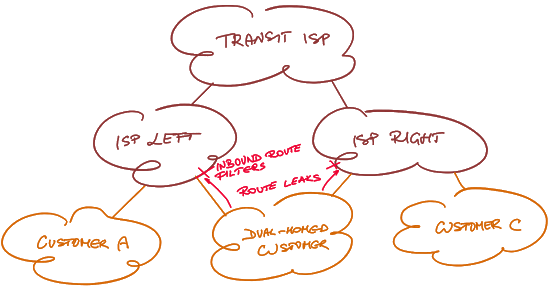 I’m positive at least one of the academic papers listed in RFC 7908 contains a rigorous definition of valley-free routing (pointers welcome); here’s a pretty loose attempt:

Here’s an alternative definition assuming we can figure out the contractual relationships between autonomous systems (good luck with that):

Assigning hierarchical levels to network nodes is a fun problem to solve. You could do it manually, automate the process, or try to deduce node’s level in the hierarchy based on its surroundings – RIFT and OpenFabric are both trying to do that to enable plug-and-pray fabric autoconfiguration.

The challenge is relatively easy to solve if you’re allowed to label the core (or edge) nodes. This is how you could do it in the Internet case:

The real fun starts when you’re trying to figure out the hierarchical levels of network elements based solely on network topology… and you have to deal with peer links on any level of hierarchy.

Anyways, I’m an old-school micromanager and prefer to have a structured network design and automated deployment. If you’re like me, you’ll find a data center fabric automation use case by Dinesh Dutt in Network Automation Use Cases webinar, deep dive into the tool he used in Ansible for Networking Engineers webinar… or you could go for a full-blown course on designing, developing and deploying a network automation solution.