Matjaž Straus started the SINOG 2 meeting I attended last week with a great story: during the RIPE70 meeting (just as I was flying home), Amsterdam Internet Exchange (AMS-IX) crashed.

Here’s how the AMS-IX failure impacted ATLAS probes (world-wide monitoring system run by RIPE) – no wonder, as RIPE uses AMS-IX for their connectivity. 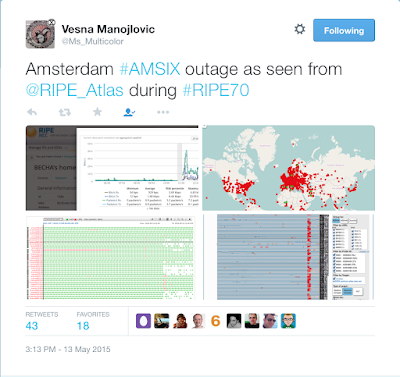 My friend Jeremy Stretch saved the daily traffic graph for posterity in one of his tweets: 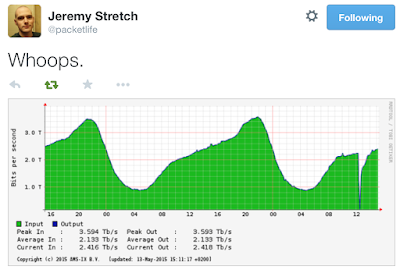 As you can see from the graph, Internet lost 2 Tbps of transit capacity, and many networks using AMS-IX (including some cloud services providers) were severely impacted. 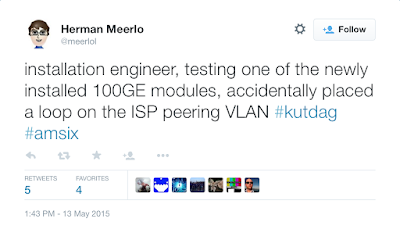 Also, keep in mind that there are a few significant differences between AMS-IX and clueless geniuses that tell you to build large layer-2 fabric (hopefully stretched across two data centers):

Jay Swan pointed me to a recent Cisco Live presentation (BRKDCT-3102), which documented several interesting layer-2 failures, including a split-brain cluster – I was telling people about these scenarios for years, and it’s so nice to have corroboration from a major vendor (not sure what the evangelists of layer-2 fabrics and DCI solutions working for that same vendor think about that presentation ;).