“I want default router address in DHCPv6 options” is a popular religious war on various IPv6 mailing lists. One of the underlying reasons is the need to implement poor man’s first hop load balancing (I won’t even consider the “I don’t want to think, so want IPv6 to behave like IPv4” mentality in this blog post), and as always, the arguments have more to do with suboptimal implementations than true technical needs. 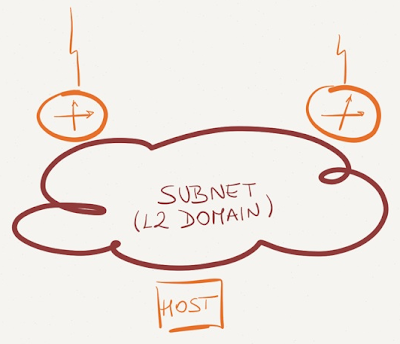 Every networking engineer worth her salt would want to use both, and there are several tools in IPv4 world (some worse than others) to do that:

There are plenty of networks that achieve pretty optimal packet forwarding without GLBP or other FHRP tricks – the crucial design decision is the boundary between L2 and L3 forwarding. Layer-3 edge or core switches from almost any vendor offer active/active FHRP deployments, either within a MLAG group or across a whole fabric.

IPv6 evangelists will be quick tell how IPv6 does things the right way: all routers connected to a subnet advertise themselves with Router Advertisement messages, and the hosts automatically select the currently available routers. Unfortunately there seems to be a gap between theory and practice – some host IPv6 stacks select one router and either stick with it or flip-flop between them after every incoming RA message.

FHRP tricks we used in IPv4 world don’t work in IPv6. You cannot use DHCPv6 to set host default gateway to the virtual IP address of one of multiple VRRPv3 groups, and GLBP MAC address tricks don’t work because the hosts listen to RA messages.

Keep in mind that networks with layer-3 core should work the same way they did in IPv4 – just make sure you buy switches that support active/active FHRP for IPv6 (oh, your vendor doesn’t support that? Maybe it’s time to vote with your wallet).

And the winner is …

According to RFC 6419 Windows Vista (and later versions) should implement RFC 4311, feedback about Mac OSX and Linux variants is highly appreciated. Thank you!