Last week I explained how layer-2 and layer-3 packet forwarding works in VMware NSX – a solution that closely emulates traditional L2 and L3 networks. Hyper-V Network Virtualization (HNV) is different – it’s almost a layer-3-only solution with only a few ties to layer-2.

Hyper-V Network Virtualization started as an add-on module (NDIS lightweight filter) for Hyper-V 3.0 extensible switch (it is fully integrated with the extensible switch in the Windows Server 2012 R2 – more about that in another blog post). 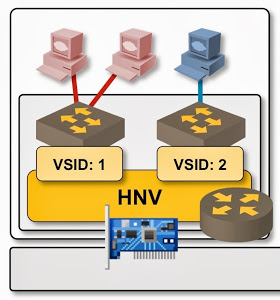 Hyper-V extensible switch is a layer-2-only switch; Hyper-V network virtualization module is a layer-3-only solution – an interesting mix with some unexpected side effects.

A distributed layer-3 forwarding architecture could use a single IP routing table to forward traffic between IP hosts. Similar to traditional IP routing solutions, the end-user would configure directly connected IP subnets and prefix routes (with IP next hops), and the virtual networking controller (or the orchestration system) would add host routes for every reachable host. Forwarding within the virtual domain would use host routes; forwarding toward external gateways would use configured IP next hops (which would be recursively resolved from host routes).

Hyper-V network virtualization cannot use a pure layer-3 solution due to layer-2 forwarding within the extensible switch – two VMs connected to the same VLAN within the same hypervisor would communicate directly (without HNV involvement) and would exchange MAC addresses through ARP requests. The same communication path has to exist after one of them is moved to a different hypervisor with Hyper-V live migration – HNV must thus support a mix of layer-2 and layer-3 forwarding. 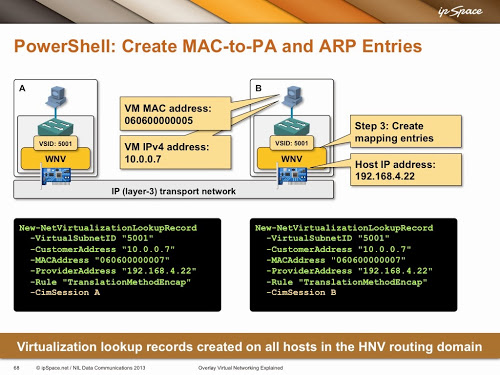 Hyper-V Network Virtualization supports IPv4 and IPv6. An IP address mentioned in this blog posts means IPv4 or IPv6 address – but do keep in mind that you have to configure IPv4 and IPv6 network virtualization lookup records independently.

The true difference between intra-subnet and inter-subnet layer-3 forwarding is thus the destination MAC address:

Summary: Even though it looks like Hyper-V Network Virtualization in Windows Server 2012 works like any other L2+L3 solutions, it’s a layer-3-only solution between hypervisors and layer-2+layer-3 solution within a hypervisor.