I’ve blogged about the need for optimal L3 forwarding across the whole data center almost a year ago when I introduced it as one of the interesting requirements in Data Center Fabrics webinar. A year later, there are still only a few companies that can deliver this functionality.

Fabric solutions that appear as a single system to the outside world usually offer optimal L3 forwarding. These solutions include:

Plexxi’s Affinity Networking is architecturally closer to QFabric than to OpenFlow-based networks, as the individual switches retain a large amount of intelligence and autonomy. More in a few weeks when we clean up the recording of Dan Backman explaining the Plexxi architecture during the recent Data Center Fabrics Update webinar.

However, there are only two companies I’m aware of that can do optimal L3 forwarding across the whole data center while using traditional network of independent devices: Arista with Virtual ARP and Enterasys with Fabric Routing.

Arista’s Virtual ARP is extremely simple – it’s like VRRP without VRRP. You have to configure the same IP address (first-hop gateway) on a VLAN interface of all ToR switches with ip virtual-router address configuration command and associate a MAC address with the shared IP address with the ip virtual-router mac-address interface configuration command. 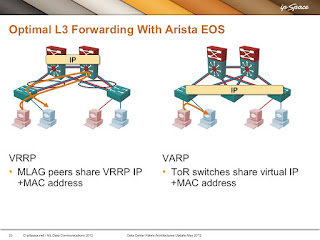 Things might get nasty if you have configuration mismatches – for example, missing ip virtual-router address configuration on one of the ToR switches – so make sure you use some sort of an orchestration system to configure the ToR switches. XMPP client implemented in Arista EOS might be good enough.