Arnold sent me an interesting challenge: he’s using two MPLS/VPN providers, with most sites being connected to both providers. He’d like to load balance the inter-site traffic across all PE-CE links – an easy task if you’re using RIP, OSPF or EIGRP as the PE-CE routing protocol, but he happens to be using BGP. 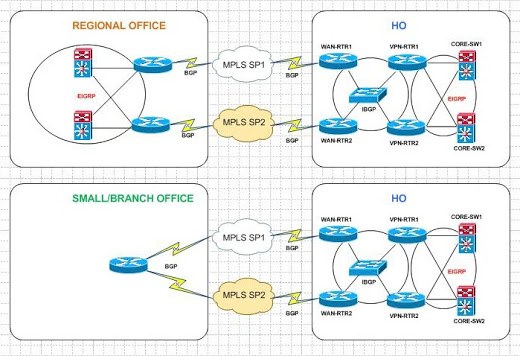 The network diagram Arnold sent me

Cisco IOS implementation of BGP supports load balancing, both across multiple EBGP or IBGP paths (and even a combination of VPNv4 IBGP path and VRF EBGP paths), but it’s pretty picky – the BGP paths have to be almost identical, including the contents of the AS path list. BGP will not use alternate paths if they’re not passing through the same autonomous systems.

You can use the (still undocumented) bgp bestpath as-path multipath-relax router configuration command to relax the path selection rules as explained in this article. After entering this command, the router compares the AS path lengths (they still have to be the same), not the actual content of the AS path attribute.