A while ago someone sent me an interesting problem: the moment he enabled simple MPLS in his enterprise network with ip mpls interface configuration commands, numerous web applications stopped working. My first thought was “MTU problems” (the usual culprit), but path MTU discovery should have taken care of that.

As it turned out, reduced MTU caused by the MPLS header was the problem, but the usual suspect (a sloppily-configured firewall) was not to blame. Following (possibly outdated) best practices found on the Internet someone configured no ip unreachables on most router interfaces. Fragmentation needed ICMP packets were considered to belong to the same bunch and thus the edge routers quietly dropped the packets they could not send into the MPLS core. 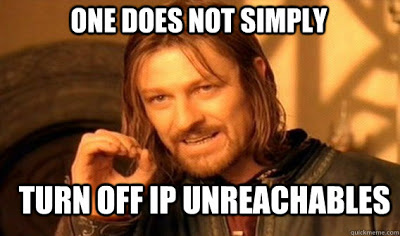