Most current SDNish tools are too cumbersome for everyday use: OpenFlow is too granular (the controller interacts directly with the FIB or TCAM), and NETCONF is too coarse (it works on the device configuration level and thus cannot be used to implement anything the networking device can’t already do). In many cases, we’d like an external application to interact with the device’s routing table or routing protocols (similar to tracked static routes available in Cisco IOS, but without the configuration hassle).

Internet Routing System (with an unfortunate acronym) is a new initiative that should provide just what we might need in those cases. The details are still sketchy (after all, this baby is only a few weeks old), but promising. To learn more about IRS, you might want to read the problem statement and framework drafts, view the slides presented at IETF84, or even join the irs-discuss mailing list. 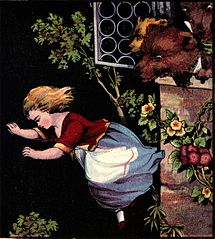 Let's hope this is not the end of the IRS story (source: wikimedia)

Even if you don’t want to know those details, but consider yourself a person interested in routing and routing protocols, do read two excellent e-mails written by Russ White: in the first one he explained how IRS might appear as yet another routing protocol and benefit from the existing routing-table-related infrastructure (including admin distance and route redistribution), in the second one he described several interesting use cases.

Is IRS the SDN porridge we're looking for? It’s way too early to tell (we need to see more than an initial attempt to define the problem and the framework), but the idea is definitely promising.