Instead of drinking beer and lab-testing vodka during the PLNOG party I enjoyed DHCPv6 discussions with Tomasz Mrugalski, the “master-of-last-resort” for the ISC’s DHCPv6 server. I mentioned my favorite DHCPv6 relay problem (relay redundancy) and while we immediately agreed I’m right (from the academic perspective), he brought up an interesting question – is this really an operational problem?

I wrote about DHCPv6 relaying before, but let’s revisit how it works:

A brief overview of the process (actually, just the second half of it) is shown in the following diagram: 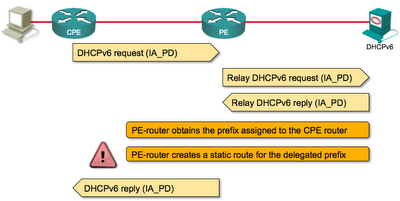 Now imagine you have a switched layer-2 access network and two PE-routers connected to it for redundancy purposes.

This is not a good idea – the first-hop switch in the service provider network should be a layer-3 device for security reasons. 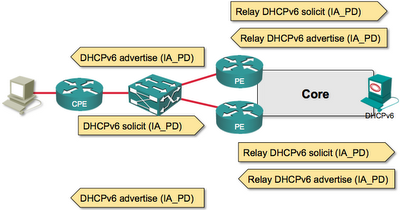 The CPE router subsequently sends a DHCPv6 request message to the selected PE-router (acting as a relay), eventually gets back the delegated prefix, and the PE-router has a static route … but the other PE-router is not aware of what’s going on.

One of the problems is obvious – you might get suboptimal routing, because one of the PE-routers lacks routes toward destination(s) with next hop in directly connected access network … but we can solve that with routing protocols that support third-party next hops.

However, matters get much worse if one of the PE-routers crashes. The static routes are lost (they can be regained with BULK LEASE mechanism once the PE-router completes the reload), but in the meantime the CPE devices served by that PE-router have no connectivity, even though you have a totally redundant access network.

Is this scenario relevant? Do you use something like that in your access network? Would you be impacted? Write a comment – Tomasz needs real-life use cases.

All three webinars (and numerous others) are part of the yearly subscription.