In the Multi-chassis Link Aggregation (MLAG) Basics post I’ve described how you can use (vendor-proprietary) technologies to bundle links connected to two upstream switches into a single logical channel, bypassing the Spanning Tree Protocol (STP) port blocking. While every vendor takes a different approach to MLAG, there are only a few architectures that you’ll see. Let’s start with the most obvious one: stacking on steroids.

Low-end devices have provided multi-chassis link aggregation for a long time and nobody realized it’s a big deal. After all, a stackable switch is just a stackable switch; in opinion of many networking engineers that’s not necessarily a sin, but neither is it something to be very proud about.

When the vendors decided to introduce the same mentality to the core Data Center switches, they couldn’t say “well, we just made our core switches stackable”; their marketing department had to invent a fancy name for the technology, be it Virtual Switching System or Intelligent Resilient Framework.

Regardless of the branding efforts, the architecture of VSS/IRF solution still looks and feels like a stackable switch: you take X independent boxes (X = 2 in VSS case) and turn all but one brain (= control plane) off. Distributed switching subsystems add some spice (= complexity) to the mix. For example, in a VSS system, the SUP blade in the secondary chassis still controls its switching fabrics.

With all the control planes but one gone into self-induced coma (vendors prefer the term standby), it’s easy to implement link aggregation. After all, the primary control plane receives all control packets (including LACP and STP messages) and directly or indirectly (through standby control planes) controls the switching fabrics in the whole system.

The traffic flow across the whole stacked system is usually optimal. Consider, for example, the following diagram: 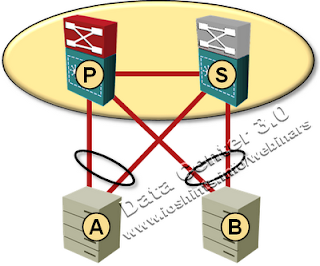 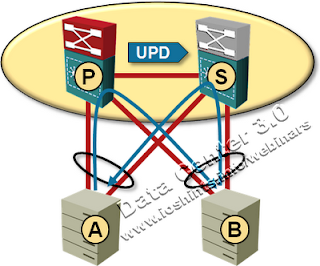 The worst scenario in any stackable solution is a split-brain failure – the link between the primary switch and standby switches is lost while the access links remain operational.

In a pure layer-2 solution, split-brain failure is not necessarily a disaster. The standby switch discovers the primary switch is gone, becomes independent (causing, among other things, STP topology change) and tries to renegotiate port channels with a different switch ID, which causes a port channel failure. Depending on how the southward switches are implemented (isn’t compass terminology a great invention?), they could split the port channel in two independent links (and STP would block one of them) or shut down half of the links in the port channel.

Layer-3 split brain event is a cataclysm. All of a sudden you have two routers with the same set of IP addresses and same router IDs in your network. Try to imagine what that does to your ARP caches and routing protocol and how long the post-traumatic effects will linger after you manage to shut down one of the switches (in case of OSPF, up to one hour).

If a vendor tells you virtual device partitioning is not a problem, run away ... or ask them how they handle layer-3 problems, lean back and enjoy the show.

The methods vendors use to deal with detecting and recovering from device partitioning tells you a lot about their commitment to the stability of your network. Don’t be dazzled by the flamboyant approaches like “this can never happen”; personally I prefer to see someone who thought seriously about the problem and tried hard to detect it and recover from it (even though we agree it should never happen).

As for what happens when the dual-active condition is detected, Cisco is yet again quite honest: the primary switch is immediately restarted (assuming the standby switch has already transitioned into an active role).

As you know, I’m most familiar with Cisco’s switches and you were a great help when I started digging into multi-chassis implementations from various vendors. If I’ve missed a vendor that also uses a stackable approach (Juniper comes to mind), please let me know. If you have links to in-depth documents that you can share, please post them.