Network designers (and smart consulting and system integration companies) often use ExpertExpress to get a second opinion on a design someone put together using technologies they’re not thoroughly familiar with. Not surprisingly, some of those third-party designs aren’t exactly optimal.

A while ago I was asked to review a data center “design” proposed to my customer by a system integrator. It had a pair of Nexus 5500 switches connecting servers and storage to a single Nexus 7000, which was then connected to WAN edge routers. 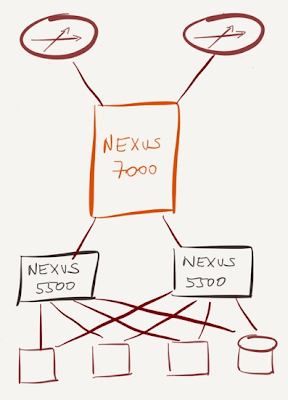 I tried to understand what the role of the Nexus 7000 was, as it looked more like a really expensive bump-in-the-wire in that particular design (not to mention it also acted as a nice single-blob-of-failure). The only potential use cases we could see for that box were:

Please note I’m not picking on the Nexus 7000 or its features. It’s just that it was not needed in that particular design. On the other hand, don’t try to persuade me how redundant supervisors in a single box remove a single point of failure.

At that time OTV was already available on ASR1K routers, and the customer already had plans to replace existing WAN edge routers with ASR1Ks, so the OTV argument was gone. We analyzed the potential drawbacks of running layer-3 forwarding on either Nexus 5500s (performance limitations of layer-3 daughterboard and lack of ISSU), but quickly realized that:

I know it was an extremely low-hanging fruit, but I simply couldn’t resist writing about it.