Early November seems to be the right time for data center product harvest: after last week’s Juniper launch, Arista launched its new switches on Monday. The launch was all we came to expect from Arista: better, faster, more efficient switches … and a dash of PureMarketing™ – the Splines.

You can read more about the new hardware in John Herbert’s blog post.

Having a very-high-density modular switch, Arista’s marketing got creative – there’s no need for leaf-and-spine architectures if you can connect all the servers to a single pair of giant switches. 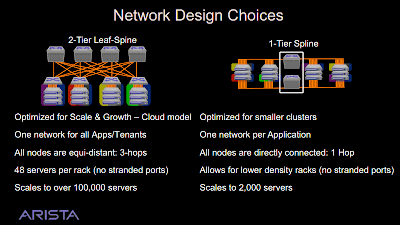 The idea is not new (and has a few limitations – more about them in an upcoming blog post). We’ve been using similar designs for years as most enterprise data centers these days don’t need more than a rack of high-density servers connected to two 10GE ToR switches anyway.

The only difference is the scale – you could connect around 50 servers to two ToR switches (you have to dedicate some ports to inter-server links, storage devices and external connectivity), now you can build a 2-switch network with forty times as many servers.

Definitely – at least from the marketing perspective. QFabric is a single management entity, but it’s still a traditional leaf-and-spine architecture with 1:3 oversubscription and 3 hops across the network (five if you count internal Clos fabric in interconnect nodes). Arista is the first vendor that allows you to build a one-tier (maybe I should write one hop) line-rate network connecting 1000+ servers.

We have the concept – one-hop line-rate network. We need a spiffy name. It’s no longer leaf-and-spine, it’s a Spline. Seriously? Which one? Maybe this?

I’ll tell you more about Arista’s new switches in the update session of the Data Center Fabrics webinar, and if you need help designing your brand-new data center network, contact me.