The next generation of Plexxi switches has two product lines:

The beauty of the Plexxi solution is the Chordal ring between the Plexxi switches that obviates the need for the data center fabric spine layer. WDM-based Plexxi switches implement the ring with programmable optics (note: although the optical components are programmable, the current ring topology is fixed); in fixed-topology deployments the switches connect to a Pod Switch Interconnect (PSI) that implements the Chordal ring with prewired fiber cables.

Plexxi claims PSI has these capabilities:

Sounds exactly like a description of a Token Ring MAU to me ;) 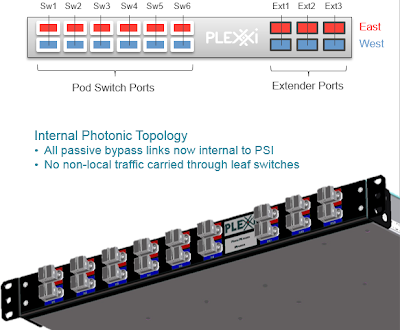 Let’s start with a 30-node Plexxi ring implemented with WDM switches. Each node establishes four 10GE connections (lambdas) with adjacent (east and west) nodes and two 10GE connection with subsequent four east and west nodes. The Chordal ring between the 30 switches looks like this (width of the line between two nodes represents bandwidth; individual lambdas are not shown).

The “bypass” links that don’t touch individual nodes still flow through the nodes on the WDM optical layer. 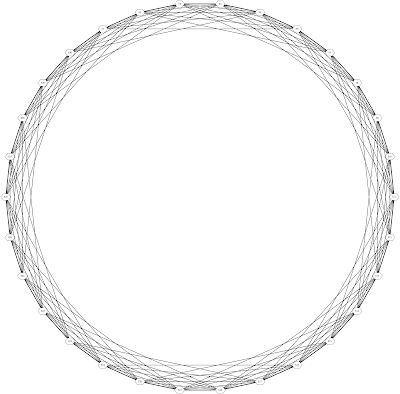 Focus on a single 6-node section of the ring. These are the optical connections (lambdas) between the six nodes that we’ll turn into a pod and the rest of the switches in the ring

Connectivity of a single 6-node pod

Replace the lambdas in the Chordal ring with fixed fibers. Optical connections (now fibers) that would terminate at a node are hard-wired to the node’s access port on the PSI. Two 24-strand cables connect the node (switch) and its associated PSI ports, implementing 12 x 10GE connectivity in east and west directions.

The “bypass” links cannot flow through the switch nodes anymore; they have to be implemented within the PSI. The internal PSI wiring that implements intra-pod connectivity looks like this:

Connections in our Chordal ring extend beyond a single pod. PSI has to provide those as well – fibers link individual node ports with East and West extender ports:

Now, what happens if you deploy a single Plexxi pod? All the red links from the previous figure become disconnected (and bits might drop on the floor), significantly reducing the overall bandwidth available in the ring backbone. To use all the available backbone bandwidth in a single pod deployment, you must connect East extender interfaces with West extender interfaces of the same PSI, as shown in the wiring diagrams from the Plexxi NDF6 presentation:

Plexxi was a sponsor of Networking Tech Field Day 6.