Someone sent me an interesting question a while ago: “is it possible to detect DOS flooding with an EEM applet?” Of course it is (assuming the DOS attack results in very high load on the Internet-facing interface) and the best option is the EEM interface event detector. 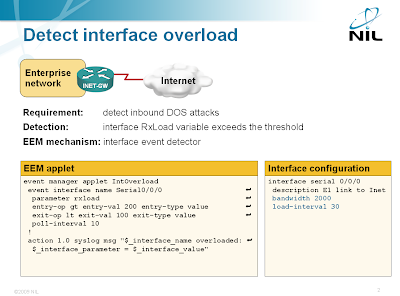 Interface event detector is just one of the many topics covered in the Embedded Event Manager (EEM) workshop. You can attend an online version of the workshop or we can organize a dedicated event for your networking team.