Great news: Cisco launched a new series of midrange routers on Tuesday. They're very probably great products (I wouldn't expect less from Cisco). Also as expected, their marketing department couldn’t help itself (yet again) and had to position the launch as a universe-changing event: this time they Revealed the Borderless Network and spent loads of money producing “viral videos”. OK, maybe their average customer is stupid enough to fall for those tricks; I’m positive you’re not … so let’s see what’s really new (here's what Cisco admits is new after you've got past all the marketing fluff):

However, one of the most important changes from the network manager perspective is the unified IOS image. No more hassle in the image selection process: you have a single image that contains all the function you’ll ever need. If your quality control process requires IOS image lab tests, you can do it once regardless of which features you need. When you need to deploy additional functionality, you just order new license, enter it in the router and start using the new features.

I’m positive someone will try to position the unified IOS image as the next best thing since the invention of sliced bread. However, it’s yet again a simple result of Moore’s law; the IOS developers were not able to develop the code fast enough to keep with the dropping DRAM/Flash prices. All the memory needed for the “kitchen-sink” image of today costs less than the IP base image in days when IOS 12.2 was released.

Actually, the official name for the kitchen sink image is Advanced Enterprise Services, but those of you who have been in the business long enough know probably still remember what the –k- acronym in the IOS image name stood for.

To make my findings a bit more “scientific”, I’ve tried really hard to find out when individual IOS releases were launched and produced a graph comparing Flash image sizes of compressed high-end IOS images (ENTERPRISE/FW/IDS IPSEC 3DES or Advanced Enterprise Services) with the exponential curve predicted by the Moore’s law based on compressed 12.2 IP Plus image (the smallest image for the 7200-series router I was able to find). 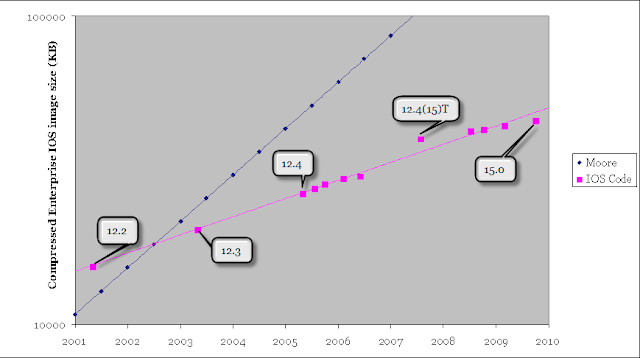 The image sizes were taken from CCO download area. I’ve used the images for the 7204 router to eliminate the potential impact of changed CPU instruction set. In some cases, I was not able to find the “original” images, so I’ve assumed the mainline IOS image size did not increase significantly during its maintenance period.