My previous certification-related post described how some companies use certifications to filter job applicants for networking-related positions. Should you follow that example? If you’re in a country with a saturated job market, where the number of applicants far exceeds the number of job postings (consider yourself very lucky if you’re an employer), you should certainly use whatever filters you can to screen the hundreds of applications you receive … but be aware that you have potentially lost a few gems hidden in the flood.

Christoph sent me an interesting question a few days ago:

I played a bit arround with 2 Cisco 1803 and I found MPLS related configurations commands in IOS 12.4(15)T (Advanced Enterprise) on this box. MPLS was not listed as a included fearture in the Cisco Feature Navigator for this image and some searching at cisco.com took me to a 2 year old document telling me that MPLS isn't supported on this series. Some more searching took me back to the Cisco Feature Navigator which lists MPLS as feature for the Cisco 1805 router (which uses the same IOS image, afaik).
So, I'm a bit confused now if MPLS is really working / supported on the low-end Cisco ISR 1800 fixed series?

MPLS was mostly available but never supported on low-end platforms (including Cisco 2600). In those days I've taken some heat for reusing existing 2600-based labs to teach Cisco-internal MPLS courses (since we were teaching the students to configure unsupported devices :).

Anyhow, the "not supported" means exactly that: it may be available (well, it is), it may work (it actually does), but if it's broken (and I've seen at least one low-end-platform-specific bug in the early days) you can't complain.

Is anyone aware whether the official support for the MPLS on 1800 series has changed? If so, please share your information with us.

If you need to offer a production-grade service to your customers, don't use unsupported equipment; if you need a solution for your personal needs or you're building a lab, go ahead.

Jeremy Stretch was kind enough to publish his IP SLA monitoring article in the CT3 wiki, at the same time changing the command syntax from the ip rtr command set to the newer ip sla command set. Thanks, Stretch!

Read the article in the CT3 wiki

If you have been visited by a friendly Cisco sales engineer recently, you might have already heard about the ACE Web Application Firewall (WAF). If you’re curious enough to start investigating on your own, you might have stumbled across the WAF product description on Cisco’s Web site, which tells you … nothing.

Let’s start with an easy question: if I already have a firewall, why would I need another box with “fire” and “wall” in its name? The short answer is “Because Web programmers rarely know how to write secure Web applications.”

read more
It looks like the wording in the “NAT-translated DNS responses are not cacheable” post was a bit too vague, as some readers understood the router would mess the TTL field in the DNS response payload when changing the IP addresses in the IP header of the response packet.

I put together a short list of MPLS VPN-related terms; I'm positive you'll find it handy if you've recently entered this exciting technology area. With copious help from our marketing department I was also able to produce a PDF version of the same document that you can download from the CT3 wiki.

Read more in the CT3 wiki

The behavior makes some sense, as the L3 NAT entry might change before the DNS response expires, but the implementation is definitely overly aggressive. In my opinion, IOS should use some sensible (configurable?) value for static NAT translations and times comparable to NAT timeouts for dynamic NAT translations. What do you think?

In the third part of the Site-to-Site IPsec VPN series in our IP Corner, Boštjan Šuštar describes the Virtual Tunnel Interfaces (VTI) and the ways this relatively new addition to Cisco IOS can be mixed with crypto maps and Easy VPN solution.

Based on the title, I would assume that the Cisco Press book Voice over IP Security: Security best practices derived from deep analysis of the latest VoIP network threats attracts primarily senior voice engineers who know that they have to secure their production networks. The author of the book strongly disagrees with my opinion, however, spending more than a third of the book on baseline explanations of VoIP, SIP, H.323, firewalls, NAT, DES, IPSec…. I enjoyed the overview chapters, as I last configured VoIP before SIP was invented, but an experienced VoIP engineer would be disappointed.

It all started with a innocuous question: can you detect voice traffic with EEM? Looks simple enough: create a QoS class-map that matches voice calls and read the cbQosClassMapStats table in the CISCO-CLASS-BASED-QOS-MIB. The first obstacle was finding the correct indexes, but a Tcl script quickly solved that; I was ready to create the EEM applet. The applet failed to work correctly and after lots of debugging I figured out the counters in the cbQosClassMapStats table change only every 10 seconds.

I couldn’t believe my eyes and simply had to test other MIB variables as well. As expected, the IF-MIB (standard interface MIB) counters increase in real-time, but obviously someone had the bright idea that we need to detect changes in traffic profile only every now and then. Although I've received suggestions from my readers, none of them works on an 1800 or a 7200. Oh, well, Cisco developers from the days when I started working with routers would know better.

Jared Valentine sent me a really interesting problem: he would like to detect voice traffic and start shaping TCP traffic for the duration of the voice call. The ideal solution would be an EEM applet reacting to the changes in the CISCO-CLASS-BASED-QOS-MIB; one of its tables contains the amount of traffic for each class configured in a service policy.

Do you have a great idea what a router should be able to do, but you cannot make it work because you can't tweak router's embedded management tools (including Tcl)? Here is an opportunity you shouldn't miss: enroll in the Cisco AXP Developer Contest. Even if you're absolutely positive that having an extra Linux server sitting next to the router is better than a router blade (and some Linux pundits had lots to say on the topic), sending your ideas to Cisco won't cost you more than a few moments of your time and an e-mail ;)

Full disclosure: I was kindly asked if I could help spreading the word about the contest, but all the enthusiasm is exclusively mine.

Recent blog posts indicate that, in at least some market segments, IT certifications are becoming a new barrier to entry: companies require a specific set of certifications in their job offerings and use those requirements to filter the candidates who are invited to the initial interview. Obviously, IT vendors pushing the certifications are getting some real traction. On the other hand, anecdotal evidence indicates that certification holders are sometimes able to memorize vast amounts of information without being able to put it to use (I don’t want to imply that they used other, less honest methods).

The ip nat log translations syslog command starts NAT logging: every NAT translation created on the router is logged in syslog (which can be sent to console, syslog host or internal buffer). You could use this command as a poor man’s reporting tool if you have to monitor the address translations on your edge routers (for example, due to security policy or auditing requirements). Obviously you should configure the no logging console first in a production environment; otherwise your router will hang a few moments after you’ve enabled NAT logging.

read more see 7 comments
I would like to thank everyone that took time and voted on the subject of my next on-line session. We have a clear winner: Dynamic routing across a firewall … although the closeness of the other topics might indicate a helping hand of our polish friend. Unfortunately, I have some bad news to go with the good ones – the “December” session will most likely happen in January or February (I'm simply running out of time).

Dear readers! This time I really need your help (uncle Google and his relatives gave me only one relevant hit and even that doesn't work on 7200 or 1800).

I'm trying to implement an EEM applet that would detect traffic rate change using CISCO-CLASS-BASED-QOS-MIB. Everything would work perfectly ... if only IOS wouldn't update the MIB counters approximately every 10 seconds, not in real-time. Is anyone aware of a configuration command that would force the router to update these counters any faster?
see 12 comments

The “Sometimes the path is more important than the destination” post has generated numerous highly interesting comments. I already planned to write about some of the issues raised by the readers (certification grind mill) or wrote about others (knowledge or recipes), so I’ll skip those and focus on the other interesting bits-and-pieces (but please make sure you read the original post first).

A while ago I’ve reported that Cisco IOS does not conform to RFC 822, potentially resulting in ill-formed e-mails send from EEM applets. The bug has been fixed in IOS releases 12.4(15)T2 (and all later 12.4T releases) and 12.2(33)SRC, but if you’re stuck with an older release, you can use a nice trick Gerald Kowalsky sent me.

One of my readers sent me a question that triggered one of my old grudges:

In my personal opinion Cisco at one point in time wanted too much plug-and-play and someone had a great idea that you can just plug another switch into your network and it would autoconfigure itself. We've been suffering because of that "insight" ever since (and the CCIE written test has material for a few more interesting questions :).

I strongly believe that VTP should be turned off by default and should generate a warning before being enabled, but it will probably not happen. What do you think?

Disclaimer: I am not a switching person and have no idea about anything below or above layer 3.

If someone insists on running IS-IS on a partially-meshed Frame Relay network without using subinterfaces (which is the proper way of doing it), it can still be done … assuming you understand what’s going on and properly configure the IS-IS routers.

Read the configuration guidelines in the CT3 wiki.

I was delighted when I got access to Cisco’s Application Control Engine (ACE) XML Gateway/Web Application Firewall (WAF) box. This box is the perfect intersection of three fields that really interest me: networking, security and Web programming. To my huge disappointment, though, all the real configuration can only be done through the Web interface. I understand that casual users of a device prefer a graphical user interface (GUI) over text commands (and Generation Z has never seen a terminal window, DOS prompt or, God forbid, an actual terminal), but you can achieve so much more with a simple text-based configuration approach:

read more see 10 comments
Thanks to everyone who took time to participate in my “ACE XML Gateway” poll (and special thanks to our anonymous friend from Poland who amused numerous readers and helped me set up slightly more secure polls). A large majority (with the notable and vocal exception of the previously-mentioned anonymous contributor) would like to see posts (or at least pointers to them) in the IOS Hints blog: 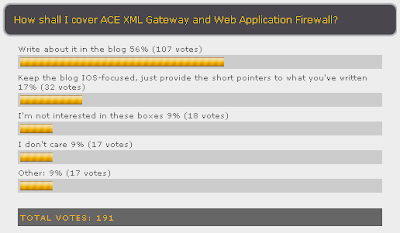 This is a nice MPLS question I’ve received from one of the readers:

I have understood the Penultimate Hop Popping (PHP) process, but I don’t understand when a router would use UNTAGGED instead of POP TAG?

Instead of answering the question directly, let's walk through a series of simple Q&A pairs that will help you understand the whole process (remember: knowledge, not recipes!).

It's highly recommended you read the first few chapters of the MPLS and VPN Architectures book before the rest of this post.