I was listening to excellent opening presentation Enno Rey had at Troopers 2014 IPv6 security summit (he claimed he was ranting, but it sounded more like some of my polite blog posts) and when I’ve seen this slide I could literally hear a blog post clicking together in my head. 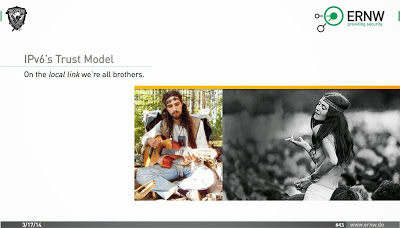 In short: IPv6 has many shortcomings, but this might not be one of them.

The layer-2 subnet model is broken

You probably know my opinion on the current layer-2 networking model – apart from being a single failure domain, it’s also a single security domain.

We can either accept that fact (and work on hardening the end-systems), split our oversized layer-2 domains into smaller ones (where all hosts in a smaller domain become totally equivalent from security perspective), or implement a properly hardened network that:

Come to think of it, we do have such a network implementation. It’s called Fibre Channel.

Of course the networking industry took another approach:

Obviously it’s not just the vendors’ problem – there are plenty of customers buying cheapest possible switches and later complaining how it’s impossible to properly secure them. Unfortunately some of the really expensive switches aren’t any more secure ;)

Some Got It Right

There’s a single company (AFAIK – I hope you’ll prove me wrong in the comments) that handles the layer-2/layer-3 boundary correctly, restoring the original meaning of data-link layer (before bridges were invented): Microsoft’s Hyper-V Network Virtualization connects VMs straight to a layer-3 virtual switch that block all rogue RA messages and terminates all ND exchanges. Amazon VPC and Juniper Contrail do something very similar, but only for IPv4.

Finally, there’s always the option of putting every single user in its own subnet. Good luck with that – you ops people and the switch vendors (who will run out of TCAM) will love you.