During my ExpertExpress engagements with engineers building multi-tenant cloud infrastructure I often get questions along the lines of “How do I integrate my public IaaS cloud with my MPLS/VPN WAN?” Here are a few ideas.

The rest of this post applies to multi-tenant cloud providers that offer private virtual networks to their customers and want to integrate those private networks directly with the MPLS/VPN service they offer to the same customers.

Many public cloud deployments use the “legacy” VLAN-based virtual network approach. Interfacing these networks with MPLS/VPN is trivial – create VLAN (sub)interface in a customer VRF for each outside customer VLAN on data center WAN edge PE-routers (Inter-AS Option A comes to mind).

If you use overlay virtual networking technology that has no integrated MPLS/VPN support (example: Cisco Nexus 1000V, VMware vCNS, VMware NSX, Hyper-V, OpenStack Neutron OVS plugin with GRE tunnels), you have to use VLANs as the demarcation point:

Integrating these solutions with the MPLS/VPN backbone is a trivial undertaking – establish MP-BGP sessions between the overlay virtual network controllers and WAN edge PE-routers. I would use Inter-AS Option B to establish a demarcation point between the cloud infrastructure and WAN network and perform route summarization on the PE-router (it doesn’t make much sense to leak host routes created by Contrail solution into the WAN network). 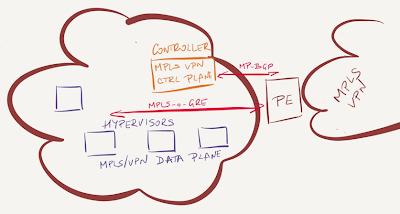 If you don’t want to use one of the MPLS/VPN-based overlay virtual networking solutions (they both require Linux-based hypervisors and provide off-the-shelf integration with OpenStack and CloudStack), use a VM-based PE-routers. You could deploy Cisco’s Cloud Services Router (CSR) as a PE-router, connect one of its interfaces to a VLAN-based network and all other interfaces to customer overlay virtual networks.

The number of customer interfaces (each in a separate VRF) on the CSR router is limited by the hypervisor, not by CSR (VMware maximum: 10).

Visit SDN, Cloud or Virtualization resources on ipSpace.net, or get in touch if you need design or deployment advice.