During my last DMVPN: Advanced And Crazy Scenarios webinar (register here), one of the students mentioned the need for non-unique NHRP registrations in environments where the public IP address of a DMVPN spoke site changes due to DHCP lease expiration or PPPoE session termination. Finally I found some time to recreate the scenario in my DMVPN lab; here are the results.

If you’re experiencing DMVPN downtime due to changing public IP addresses of your DMVPN spokes, apply the ip nhrp registration non-unique interface configuration command to the DMVPN tunnel interface. This command will reduce the recovery time to less than a minute. Faster recovery is harder to achieve as the router has to execute a number of steps following a physical interface flap:

You can fine-tune steps 1-3 on the spoke router; step 4 sometime requires coordinated changes throughout the network. 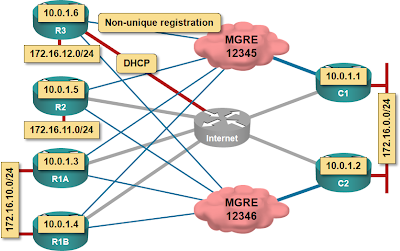 Attendees of the previous DMVPN webinars will get access to the new recording and expanded router configurations after the next webinar.